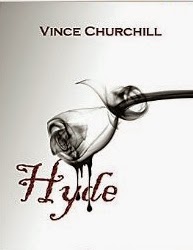 I do enjoy erotica, but don't read it often because a lot of those stories tend to get boring, repetitive or have no real plot line, not so with Hyde.

We are first introduced to Sam, the main character, at the gym and its obvious she can take care of herself; so she should, she is a Detective in a  Major Crimes unit, her personality is a little cliché but works well due to VC writing skills.

Cut to Simone and VC launches straight into some mind boggling rough sex, finished with a sms text.  Not sure about this as an opening chapter, that much in my face was a little hard to take and took me several attempts to get into, I was also a little confused. However, all becomes clear when we find out how the two are related and Hyde or The Keeper, as the police like to call him, has his next victim.

But The Keeper is not your usual kidnapper, he is on a mission, Hyde is sexy, thrilling, and just weird enough to almost believe, to almost want to  be kidnapped yourself, almost.

The hunt and the game are soon on and it makes for riveting reading.  Naively I thought I understood the plot line and how this would soon pan out along the usual lines and become obvious but VC soon twisted that on its head!

VC's imagery is creative, making reading Hyde an almost visceral experience; fear and sex are given equal attention and the writing of each is powerfully effective and emotive.

The story, in my opinion, lends itself to being longer, it could have been expanded and still not felt drawn out, it was almost the clipped and edited version, like editors used to do to SK; put your foot down Mr Churchill.

HYDE
Posted by fluffyredfox at 14:33