I always enjoy LL’s prefaces, she opens up so much about ideas, how a character came to be, the thought process and this is no exception.

Love Beads (Book 1):
Jane is the strangest vampire I have come across in a long while, and I love her!!

One sunny afternoon she meets Randy and his weird dogs, strange job and horrific food sense.

LML treated me to a brilliant piece of mystery thriller writing with a super natural element, with just enough grossness to add a horror element.
She hints this will be a series and I do hope so.

Some fabulous in depth and textured descriptions allow you to become immersed in the story I was totally engrossed in this novella and was sad when it ended.

Jane is an intriguing character and I so wasn’t to know more about how she became what she is and what her forward plan is.

Flashbacks (Book 2):
Nice to be back with the gentle hippie vampire that is Jane.  Tongue in cheek reminder that taking drugs is bad when she “eats” a meth laden bully attempting to frighten and probably kill an old Vietnam veteran by the name of Old Man Kevin.

During this moment of hunger and moral outrage she saves Kevin, incurring the wrath of his gang which catches up with her much later in the story.
I felt this story was much darker than the first with the horrific flashbacks to the war as told by Kevin, such a sad story. However, this allows Jane to also share sad and horrifying stories.

Whilst the ending was sad I really feel like I understand Jane a little better, and even if a vampire she is a better human than me being so kind to those she encounters after her horrible life.

Not as much humour in this story, but still enjoy the writing.

Hair (Book 3):
Jane is ironically a vegan vampire with a knack for getting into trouble.

Needing to head to warmer climes she heads South into Bible Belt country, the weather maybe warmer but the hospitality is not; at least for an outwardly appearing teenage vagrant.

When a purple dog runs past her during a routine police stop you are already drawn back into Jane’s strange world and you can feel the magic carpet ride coming.

Whilst she knows that she must feed and she often disgusts herself with the berserker like frenzy when this occurs she knows it was not her that started to rip the Officers to pieces in the woods, even though she does not turn down an easy meal.

LML has a wonderful skill of explaining the pain that Jane feels during these feeds giving you a sense of the gnawing hunger vs the need to preserve all life.

As she hides in the forest she is found by the local Ranger, Bobby, and he kindly takes her home for dinner, although he does have his own agenda and what is actually on the menu?

His family are a strange mix of rednecks and homely parents, then LML introduces  the local fruitloop who professes to be seeing lake monsters, werewolves and vampires and you know things are about to go squiffy for poor Jane!

When said fruitloop decides to rid the world of a “stinking leech” he sets in motion a terrible chain of events, killing sprees, hidden bodies and family secret revelations.

Whilst all this is going on LL manages to throw in some horrific flashbacks of Jane’s previous life and her “change”.
Overall another wonderful installment in the undead life of Jane. I am more intrigued by this vampire now; LL is expertly giving little hints of the true horror in Jane’s life whilst telling these little chapters in her life.

Bonus Content: Flower Power:
Taking a rare moment to enjoy a coffee and piece of cake Jane is interrupted by a strange ghostly figure with an even stranger offer.

Via haunting memories, we are told of a horrific encounter Jane had with an astral plane travelling witch. Through varying levels of physical and mental torture including a trip to meet her long dead mother, Jane endures her recollection of meeting Holly and her stubborn sister Caitlin.

The offer to help rid this world of this terror is too much for Jane, who herself continues to seek redemption to Heaven through good deeds.  She agrees to plunge herself back into this world to trap Holly.

This time around she faces worse mind games and even a fish tank filled with biting and hungry fish!  All is never what it seems with witches though and the ending is brutal.

Revival
Posted by Unknown at 07:20 No comments: 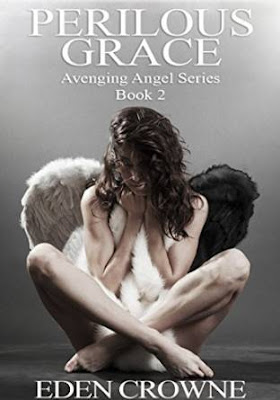 A shady group are trying to unleash the old gods, this is never a good idea, locked up deities are there for a reason! It seems when a Queen wants her King back Heaven and Earth will be shifted.

Evie & Riley are hot on their tails, but never a step ahead, as artefacts and relics go missing around the world. However, this time they also have a friendly “dog” to help them!

Battle scenes galore as Humans and Celestials duke it out with tons of magic sprinkled on top. I really enjoyed the varying PoV within those scenes it brought to life the mental imagery.

Twists, turns, skulduggery, back stabbing and double spying galore; a real mind bender of a plot.

Love how EC writes and she clearly loves her characters. Looking forward to book 3.