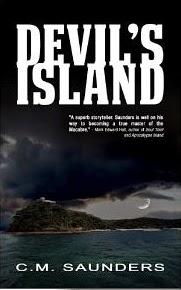 Davon Rice is an ex-military squaddie, now job hunting back in the real world which is grinding him down; apparently trained killers are surprisingly hard to find jobs for.

When a random pop up appears on his search log for a job looks promising he soon sends off his application, a reply is swift and so begins the process of attaining his “for the moment” dream job.

Soon Davon finds himself transported to Devils Island, a place he cannot find on any map. This is a remote island with a survival unit on site, but for surviving what?

His role is to guard the unit with regular patrols and whilst the building is fully stocked with basic life support it has no real entertainment and the solitude soon becomes paranoia inducing.

The mysterious agent Venke keeps popping up throughout this story and lends a little bit of spook to the whole thing, as if mysterious eyes in the woods and strange shadows on camera are not freaky enough.

Whilst I understood the paranoia element I would have liked CMS to have had more time to build this up, the length of time it took for it all to happen was too fast for my liking, and can you have red emerald eyes??

The ending was original from my perspective as not read anything similar before and I enjoyed the whole concept but feel that this short story could really benefit from some expansion, flashbacks, more background on the island etc.

CSM has an exaggerated way of describing things, each element of any “thing” is given his full attention, at first I found this annoying but then realised it actually drew me deep into the story, like being sucked through the pages.

Devils Island
Posted by fluffyredfox at 23:32