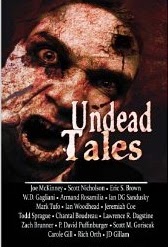 Resurrecting Mind by Joe McKinney: Poor Kevin the last man alive after the world ended three years ago, its Xmas eve but he still believes.

But maybe he is not truly alone, whilst out foraging for decorations, he spots an ex-girlfriend and with some very corny jokes tries to nourish her back to life from the world of the zombie “faker”.

The twist at the end is heart breaking. Such wonderful writing and a superb way to start this anthology.

Louis by Carole Gill: Louis has decided to become a necromancer after his best friend dies. eeeew at the practice mouse.

A great tongue in cheek feel to this story, yet another interesting author I must seek out and try a longer piece of work from.

Breaking Out by Eric S. Brown: Bio toxins, the military and naughty, unethical Drs; what could possibly go wrong!

Loved the telling of this notsooriginal story. Blindingly fast, it was a super read.

Hard Choices by Todd Sprague: The juxtaposition of some of the Hard Choices and comments from the narrator would have been funny had they not rung the sad bell of truth a little too loud.

The Hard Choices only get worse as survival becomes the utmost driving force to this man.

I am curious to know if this is a standalone brief flash of a story, or if it is part of a greater story.

So far, every single author and story has been spot on!

Until Hell calls our names by WD Gagliani: Loved the approach to telling this story.

Set in the Old Wild West it brought a new tinge to an old story.

In between tales of confederacy and submarines (!) is the most awful tale of relationship abuse.

The wronged woman, along with her Mother, cast zombie spells to avenge they abuse. The story which follows is complex and I found it to be too harrowing to “enjoy” but it was thoroughly entertaining and caused a different sort of shudder in terror.

Amazing writing to make me feel so uncomfortable.

Till death do us part by Scott M. Goriscak: Poor Tim, the mortician, he finally finds the love of his life only to lose her in a freak accident.

Of all the horror in this book, the reading of the embalming made me actually gag.

When a rogue bolt of lightning reanimates his love all sorts of strange things start to occur.

I had to giggle at certain body parts coming apart as she decomposes. The ending, for me, was hilarious.

I forgot my own name by JD Gillam: A sad story from the zombies PoV.

This was obviously hard to write due to the decomposing brain, but well accomplished and interesting to read.

Zombie Camp by Lawrence R. Dagstein: Day care camp for zombie children, now that’s a thought! As the world has changed, apparently parental love and social ambition has not.

Very well-articulated to bring forth all the trappings of rich families and the dilemmas obviously faced when picking your child’s education and play mates.

A cracking concept with some outstanding dry humour.

The Zombie with the Dragon tattoo by Armand Rosamilia: Another rip roaring giggle a minute story.

Gary is in lust with Roxy the stripper, even if she is now one of the undead and all the hassle that brings.

When he decides to break into the Cheaters strip bar for one last lap dance he meets the bouncer and DJ who are not what they seem.

The normal sex focused zombie humour from this author, a really fun little story with some clever character twists.

Feast of the Dead by P. David Puffinburger: The first story with editing errors? Or not? I am not sure if this was an attempt at first person writing with intentional errors, but as it went on it did not feel right in its prose
.
This story was neither funny nor sad but degenerated into a deliverance type rape scene that was poorly written.

Really felt this story was out of context for this anthology so far, or maybe I just didn’t “get it”.

Mick’s Rules by Zach Brunner: A weird little tale of a 50’s circa zombie frequenting a bar owned by Mick and boy does he like to pick a fight!

Lots of dialogue and some nifty left hooks make for a fun showdown between the pair.

What walks in afterwards makes me want to visit and order some nachos and beer for some “people” watching.

Yet another fabulous author, who plays well on stereo types.

Written during rapture by Scott Nicholson: A love note vs a suicide note. Very brief story but oh so poignant.

Carriers by Ian DG Sandusky: A new take on what causes the zompoc. Kind of put me off my dinner!

Some great explanations, funny? Not so sure but definitely a sad indictment on our current way of life and destruction of the planet.

What’s a man gotta do by Chantal Boudreaux: An old ranch hand is trying to eke out a living by foraging and trading in the zompoc world.

However, he has an addiction, his Drink.  He risks life and limb for this special taste.

Whilst serious throughout the story the final lines really leave you on a giggle.

My name is Riley by Mark Tufo: Told from a dogs PoV this is a unique take on the zompoc.

Riley’s little pack must survive the start and ongoing zompoc, a teenage girl, a baby, a runt dog, Riley and a naughty cat – sounds like the start of a good joke – it’s actually a fabulous series that I encourage everyone to seek out.

How do you kill what’s already dead? By Jeremiah Coe: The Germanic barbarians are facing off the invading Roman Hordes, only these turn out to be zombies, an unfair advantage.

With a lot of chatter about the ancient military style  I found it hard going as not my favourite topic to read about. But the author gave me characters that I really started to care about to follow and become involved with.

The sad little twist at the end made the read very worthwhile.

Of the Dead by Ian Woodhead: As if zombies aren’t bad enough IW thinks up spider mutated zombies!

Just what is going on in that food factory, you can probably figure it out, but this author just loves taking you for a ride of terror.

The world presented in this short story is complex and hints at a larger set of stories, but IW does have extensive zombie writing experience, well worth a seek out.

I loved the humour, dark and slapstick, mixed with all the horror. Some really original stories mixed in this anthology with some original telling’s of old stories.

The contributors are well picked and well placed, so credit to the editor, himself an accomplished author.  Rich Orth has amazing little poems scattered throughout, which makes for some light relief and is an inspired thought.

One of my favourite anthologies to date.

Undead Tales
Posted by fluffyredfox at 15:54